21 year old Kulbir Dhaka defeated  experienced boxer Rahul by a split decision in one of the finest bouts of the year 2021.

The eight round contest was the highlight of the Boxing show promoted by Amjad Khan Boxing Foundation at Pune, Maharashtra.

Rahul Kumar, was coming into this fight on the back of a loss against Sagar Narwat at Punch Boxing Championships at Noida in September this year.  He needed to win today to improve his WBC India Rankings.

Round 1 – Rahul,  started slow and was gauging Kulbir’s fight plan. Kulbir Dhaka, scored some good combinations and won the round because of poor work rate from Rahul. Rahul, came in hard in the last 1 minute of the first round, but it wasn’t enough.

All 3 judges scored the round in favour of Kulbir Dhaka.

Round 2 – Rahul started much better but Kulbir was keeping his guard up very well.

Kulbir was relying on 3 punch combinations and trying to fight on the outside. 2 Judges scored the round in favour of Rahul and 1 judge in favour of Kulbir.

Round 3 – Kulbir, controlled the round owing to a better work-rate. Rahul, still seemed to be warming up. 2 Judges again scored the round in favour of Kulbir Dhaka

Round 4 – A much better round from Rahul. Tables were turning in favour of Rahul.

Round 5- Rahul, significantly upped his work-rate. Both boxers were now fighting very close to each other. A lot of uppercuts from Rahul but Kulbir was solid in defence. Kulbir’s straight punches were piercing through Rahul’s weak defences.

2 judges scored the round in favour of Kulbir Dhaka.

Round 7 – Rahul looks really tired. Kulbir has worked this fight really well. Went on the defensive early in the round.

Both boxers continue to fight very close to each other. Rahul had very little to show again at the end of the round. Kulbir, did enough to win over 2 Judges in this round

Round 8 – Rahul started the better of both boxers.. Kulbir grew into the round.

This was a close fight and right up there with other Boxing classics that India has produced in the last few years. One of the finest fights of 2021.

Another clinical performance from Adil Rajesh. He was in control of the bout all through the 6 rounds.

He looks good in defense as well as in attack. Mahender Singh Soti tried working in bursts, but seems to have a habit of dropping his hands down a lot of times.

Soti, suffered a bleed in his eyebrows in the 4th round, the Referee and the Doctor were able to clean him up and allow him to continue. Adil,  typically leads with a straight left jab and follows up with a right hook and Soti, kept walking into these combinations.

Soti would have learnt a lot in this fight and should be proud that he didn’t give up despite the tremendous damage he took from Adil Rajesh all through the 6 rounds.

Very slow start did not engage in Round 1. Arun Nicked it owing to a more controlled approach to the round. All 3 judges scored the round in favour of Arun Sharma.

Round 2 – Power Punches from Arun. He waits for opponents to come forward…Works on the Countrer. When he does charge he works combinations.

Knockdown in Round 2 in the last few seconds…

Early in 3rd Round – Heavy blows . The referee correctly intervened to stop the bout in

A slow fight.. Despite the height advantage Vishwas lahori was not able to dominate the bout. Both Boxers seemed to give too much respect to each other. Amarnath had just fought 72 hours back and looked fatigued.

Lahori stayed ahead in the first 2 rounds, however Amarnath had started to move much better by the 3rd round and was scoring good combinations

Rahul Singh was far too good for Amit Yadav. There wasn’t much he could do to cut down the onslaught of hooks and combinations from Rahul.

The Almora boxer came out hard in the 3rd round and within 15 seconds a few combinations to the body went unanswered from Amit Yadav.

The referee rightly stopped the contest and awarded the bout in favour of Rahul Singh.

Rahul Singh won by TKO in 3rd Round.

Saurabh Kumar, continued his winning run with a 3rd Round TKO over 18-year-old Manipuri boxer Thangsanglian.

Saurabh, dominated the fight from the outset, and clearly outpunched Thangsanglian with a superior punching work rate. Thangsanglian, showed some fight in the 1st round, however, he could not match up to the pace that Saurabh was setting.

In the dying seconds of the 3rd round, Saurabh, caught Thangsanglian with one of his straight punches. Thangsanglian, indicated a problem in sight and the Ringside Doctor was called for a review. A Red card was shown by Dr. Kiran, indicating that Thangsanglian would not be allowed to continue fighting in the bout.

The bout was declared a TKO in favour of Saurabh Kumar.

Saurabh Kumar, was already ahead on points on the Judges’ scorecards as well.

Md Azahar was coming into this fight on the back of a loss last week at the same venue. He desperately needed a win to improve his record.

Md Azahar won by a first round TKO due to a nose bleed that Zou suffered.

Bout stopped after the Referee consulted the Ringside Doctor.

Zou was clearly unhappy at the stoppage. However, the Referee & Doctor took the right decision in light of the continuous bleed.

Power Round 1…Yugandhar wins with a knockdown late in the first round. 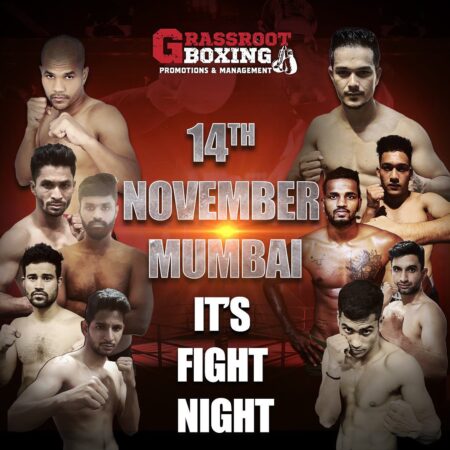