Read our exclusive Round by Round Boxing Analysis here.

Good Opener for Lalrinsanga Tlau. He was not only composed and assured in his movements, but was also landing clear punches to Quarm’s body. Eric Quarm did not have many scoring opportunities and was resigned to acknowledge Tlau’s superior movement and combinations.

Tlau was firing jabs and left hooks to the body with Quarm on the back foot. Quarm tried a short spell of aggression but Tlau was back in charge with his jabs, left hooks and straight Lefts. Some of the straight punches rocked Quarm.

Tlau again made a quick start in this one landing his jabs and putting Quarm under pressure from the bell. Finally, Quarm came to life and he was marching in firing hooks and uppercuts. Tlau was on the back foot countering well while outworking him inside.

The pace was hot with the promise of a classic battle in front of us. Quarm continued to rumble forward pumping out hooks and uppercuts. He scored with a few rights in succession, but Tlau who was on the backfoot continued to outscore Quarm with some great counters. A lot of aggression between the Boxers and the referee had to warn both Boxers for Holding and Swivelling.

Quarm started this round with Straight jabs as he was not able to keep Tlau from countering his Right hooks. Tlau was throwing his on Straight Lefts which were piercing through Quarms defences. Quarm attempted some showboating and quick feet to try and throw Tlau off guard. But that just got Tlau moving forward and firing his straights lefts even more. It was a big round for Tlau. He was showering Quarm with punches rocking him with right hooks to the head and raking him with body punches.

Good round for Tlau. Quarm was angrier as the round went on, The referee had to warn him again for Holding. Tlau was moving more and using his jabs and hooks to Quarm’s head. Quarm kept coming and Tlau was happy to keep plucking away at Quarms head with Jabs and Straight Lefts.

Tlau was moving well and scoring then backing off instead of standing and trading. He then began to put together some combinations of five and six punches that were rattling off Quarm but the Ghanain responded even though being outlanded. A lot of pushing and shoving, with Quarm going through the ropes on one occasion.

Both the Boxers had given everything in every round and they continued to do that to the final bell. Tlau just had that little bit more left and he outlanded a tiring Quarm.

Tlau won the fight with a Unanimous Decision and all 3 Judges scored 80 – 72 in favour of Tlau. 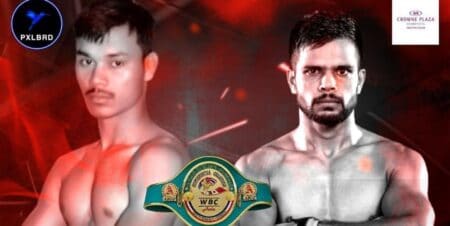